The 5 Weirdest Boats Ever Made

A boat is a boat, right? Well, not exactly. You’d be amazed by how weird they can get! This list takes a look at 5 of the weirdest boat ideas ever imagined.

Russia and nuclear power don’t exactly have a stellar history together. Chernobyl was the single worst nuclear power accident in history, topping out as a level 7 event (the highest level you can possibly get). A cloud of radioactive material was carried by the wind to European skies, where it affected thousands (possibly even millions) of living creatures. The explosion took the lives of 30 Russian workers and the battle to contain the radioactive material involved more than half a million workers and cost upwards of 18 billion ruples (about $500 million).

So yeah… it was pretty freakin’ bad.

Combine that bad history with the recent Japanese power plant leak, and people around the world are starting to get a little bit nervous about nuclear energy. So, the Russians came up with an inventive solution: why not just build a nuclear power plant on a boat and send it out into the sea? This isn’t just a pipe dream, either — the Russians actually plan to build to have it operational by 2019.

Of course, this just brings up other concerns. Where does Russia plan to anchor the nuclear reactor? How safe will it be during storms? Will it have an escort of battleships to keep it safe?

The Great Barrier Reef is one of the world’s most beautiful natural attractions, but the Australian coast is miles away. What’s an avid diver to do? Check into the ReefWorld hotel, apparently. 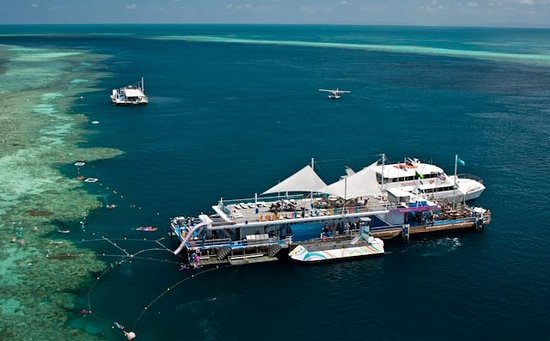 This floating hotel is a barebones resort that caters to diving aficionados. You can literally strap on your scuba gear, step off of your balcony, and start exploring the Great Barrier Reef. The only catch is that there isn’t much to do at the hotel besides drink booze and dive (hopefully not in that order). For die-hard divers only!

Environmental activists have been dreaming of the moment when we turn our backs on carbon-emitting fuels in favor of solar energy. While many people would welcome that type of technology, we may not be too thrilled about the aesthetic that comes along with it.

The Turanor PlanetSolar runs entirely on solar energy, and boy is it ugly. But don’t let its looks fool you — this high-tech ship managed to traverse the entire world. Just think of how much money they saved on gas bills!

Artists are weird. They’re always coming up with goofy ideas, like suspending sharks in formaldehyde or living in car-sized, floating eggs. Designed by artist Stephen Turner, the Exbury Egg is a humble home/boat that would allow one person (or maybe two if you don’t mind lots of snuggling) to live on a body of water.

Without any sort of propulsion system or electrical outlets, however, the Exbury Egg would probably start to feel rather confined for a lot of people. What do you think? Does a tiny, isolated home like that look like paradise or hell on Earth?

Last but not least, we have this floating island envisioned by the legendary artist Robert Smithson (the same guy who created the Spiral Jetty). Dragged by a tug boat throughout New York’s waterways, this miniature garden brought a little bit of green to the Big Apple.

This boat might seem superfluous if you’ve never been to New York City, but I can attest from personal experience that there just aren’t many trees in the City that Never Sleeps. As technology advances, floating gardens like this one might become a fairly common sight in cities across the world as smog, pollution, and the green movement make public beautification a necessity.

So, next time somebody mentions the word “boat,” don’t think this:

There are millions of possibilities for your next aquascaping project. Once you free yourself of preconceptions and traditions, you’ll be able to imagine truly unique ideas! If you had the opportunity to create a never-before-seen piece of floating artwork, what would it be? Share it in the comments below!