Civilization used to spread outward. Thanks to the marvels of modern engineering, civilization now likes to climb upward. Massive skyscrapers that give you the most bang for your real estate buck have become a common sight in cities across the world. It makes us wonder: if humans like vertical buildings, what would it look like if animals lived in vertical homes, as well?

Artists Lu Yang, Christian Lindle and Raoul Bukor answered that question with their thought-provoking installation, Fishpond City. The tanks form a perfect 1:60 scale replica of high-rise buildings that are currently under development in Xi’an, China (the city that’s famous for the Terracotta Warriors, which is just a short drive away). Once completed, the high-rise buildings will host 1,500 people. Care to guess how many goldfish inhabit these tanks? You guessed it: 1,500. Installed in a small building near the construction site, these fish tanks will offer locals a fairly accurate depiction of what life will be like for residents in the soon-to-be-finished buildings. The artists stated, “These residents [the goldfish] act as a bridge to perception and empathy of urban space.”

It’s also worth noting that these goldfish carry special connotation in the land of China. From an American’s perspective, these tanks might seem to send out a dehumanizing message by comparing apartment dwellers to cramped sardines. Chinese people are more likely to put a positive spin on the art piece, because they see goldfish as a symbol of good fortune and prosperity. In fact, I have that on good authority! My significant other (who is Chinese) interprets the art piece as a shining example of Chinese ingenuity and accomplishment. The artists seem to agree: “Fishpond City is a measuring tool for cultural identification of urban space and reflects on the high speed development of a society,” they said.

To fully complete the image of bustling life in the city, the artists illuminate the tanks with color-changing LEDs to reflect the passage of time. The lights give off a warm orange glow in the morning, shift to a clean white in the middle of the day, and then fade to a sultry red-purple at dusk. They also play audio of traffic, conversation, and daily life in the display room. Even the filtration system was incorporated into the city-like sprawl. Water siphons out of the tanks into tree-shaped filters in the ground to represent public parks. 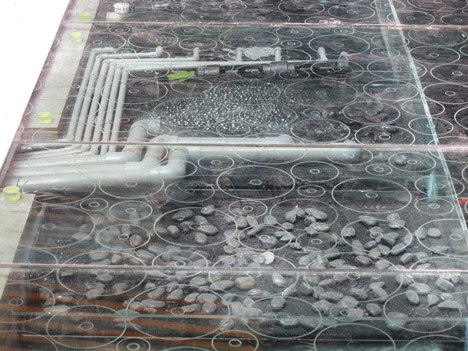 I absolutely love these artists’ idea. It would be easy to adapt their idea into other businesses. For example, are you in the process of building your dream home? You could commission a custom aquarium in the shape of your future home to tide you over until the build is complete. Do you run an architectural firm? Nothing will impress potential clients quite like a to-scale aquarium replica of your proposed design. Are you a business owner? Place a to-scale replica aquarium of your office building in your lobby for a truly eye-catching centerpiece.